Southern California waters support ever-growing populations of four species of pinnipeds, or seals and sea lions: elephant seals, California sea lions, Guadalupe Fur Seals, and Northern Fur Seals. These previously threatened, recovering populations are expanding into past habitats now occupied by humans. As a result, conflicts between human and animal populations are becoming more common as use of space and resources intensifies.

Our work in the Channel Islands aims to understand the relationships between marine animals and their environment in order to address threats to ecosystem health. Senior Research Scientists Drs. Brent Stewart and Pam Yochem have worked in the Channel Islands since the 1970s studying changes in population and species health. They conduct annual surveys and censuses at colonies at San Nicolas and San Miguel islands, contributing to more than 35 years of research. 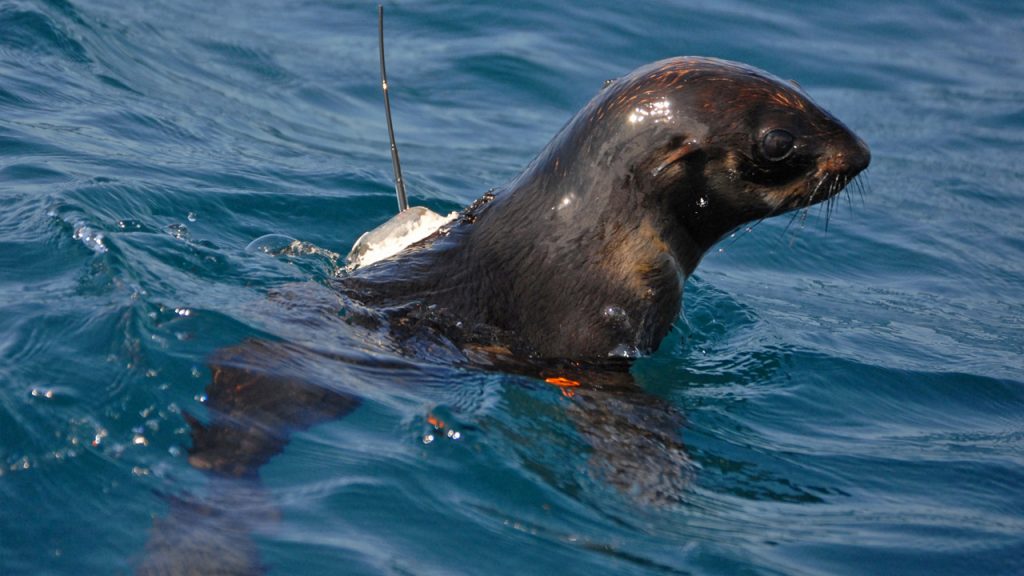 In addition to our data collection at the Channel Islands, we partner with SeaWorld

San Diego to track behavior of rescued seals and sea lions after their return to the ocean. Using transmitters that record not only the animals’ locations but also the depths at which they’re diving and the temperature there, we’re tracking the use of marine habitats by these top-level predators. Having extensive data on hand allows us to predict and prevent negative impacts on ecosystems from human disturbance, habitat loss and pollution, and climate change.

From 2013 to 2015, the number of live-stranded sea lion pups picked up by the California Marine Mammal Stranding Network was much higher than average, leading NOAA Fisheries Service to declare an ‘Unusual Mortality Event’ (UME) for Californ

ia sea lions. In order to better understand the underlying causes of this UME, each year Dr. Stewart has attached his transmitters to rehabilitated sea lion pups returned by SeaWorld. The transmitters allow the sea lions’ movements to be tracked for four to six months, when the animals molt.

While Dr. Stewart focuses on population tracking, Dr. Yochem monitors the health of pinniped colonies at the Channel Islands. Our ocean health program studies ways to prevent disease spread, promote ecosystem health and resilience, and gauge risks of disease transmission between humans and marine life. Using biomedical sampling kits, Dr. Yochem monitors seal and sea lion health and tracks the spread of potential zoonotic (passable from animal to human) diseases. With our decades of research data from Southern California pinnipeds, we can make predictions about whether animals can survive and/or thrive under a particular set of conditions, including increases in ocean temperature and acidification, emergence or resurgence of diseases with epidemic potential, declining prey resources, and toxic blooms or spills.

Dr. Yochem is part of a national team studying the flu in unusual hosts, like elephant seals, to understand the ability of a virus to jump from one host to another and initiate a human epidemic. Thanks to samples collected for more than thirty years at the Channel Islands, we can help investigate the human health risk posed by the flu in marine mammal populations, helping public health officials develop strategies to prevent epidemics.