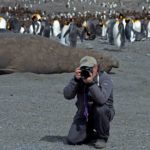 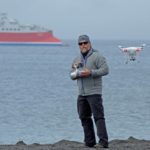 February 10, 2018 marked the 40th anniversary for Dr. Brent Stewart’s joining the Hubbs-SeaWorld Research Institute as a full-time employee.  Brent came to the Institute after obtaining his undergraduate degree from UCLA.  Since then he has earned his Master’s from SDSU, his PhD from UCLA and his JD from Boalt Hall at UC Berkeley. During his four-decade long tenure, Dr. Stewart has produced an outstanding array of contributions to the scientific literature as well as educational materials for the public and has mentored dozens of students through graduate school.
Whether conducted in the tropics or the polar circles, in the deepest reaches of the ocean or flying over critical habitats, along highly impacted rivers or stretches of coast hardly touched by humans, Dr. Stewart’s research has benefitted the conservation of wild animals by deepening our understanding and appreciation for them.  His commitment and dedication to marine science is very much in keeping with the conservation ethos of our founder, Milt Shedd, and his record of excellence in science is a complement to our namesake, Dr. Carl Hubbs.
Please see above gallery to get a glimpse of the Dr. Stewart’s far-ranging reach of his research.