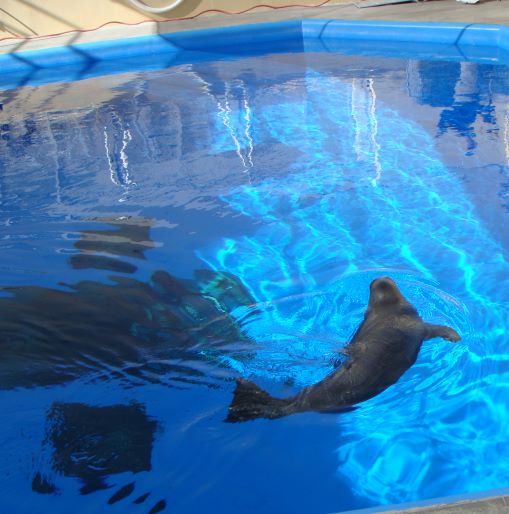 Marine mammals are vulnerable to entanglement in nets and lines, so we tested whether pingers attached to fishing gear would deter entanglements with various marine at SeaWorld San Diego. Marine mammal responses to pingers differed strikingly between animals, but all of the animals initially showed aversion to the sound. Harbor seals left the test pool or occasionally touched the pinger object, although some eventually manipulated the pinger extensively. California sea lions reacted initially with avoidance and defensive behaviors. However, they quickly returned to baseline activities and readily took fish from nets with pingers. Northern elephant seals reacted the least. Bottlenose dolphins and a Pacific white-sided dolphin did not manipulate the objects but made fast investigative or passes near them. They also did jaw claps, which is a threatening behavior. Commerson’s dolphins responded particularly strongly. Counts of some defensive or aggressive behaviors differed dramatically in the presence vs absence of the pinger, including bows (70 vs 0), rooster-tailing (117 vs 0), and fluke slaps (76 vs 2). Across seven trials, avoidance time in a refuge pool rose to more 90%, indicating animals were becoming more sensitive to the noise. However, Commerson’s dolphins charged fishing nets deliberately in spite of the pinger. These experiments show it is more likely that pingers reduce entanglement by arousing aversion than by warning marine mammals to avoid a hazard.

Publication:
Bowles, A.E. and R.C. Anderson. 2012. Behavioral responses and habituation of pinnipeds and small cetaceans to novel objects and simulated fishing gear with and without a pinger.  Aquat Mamm 38:161-188.