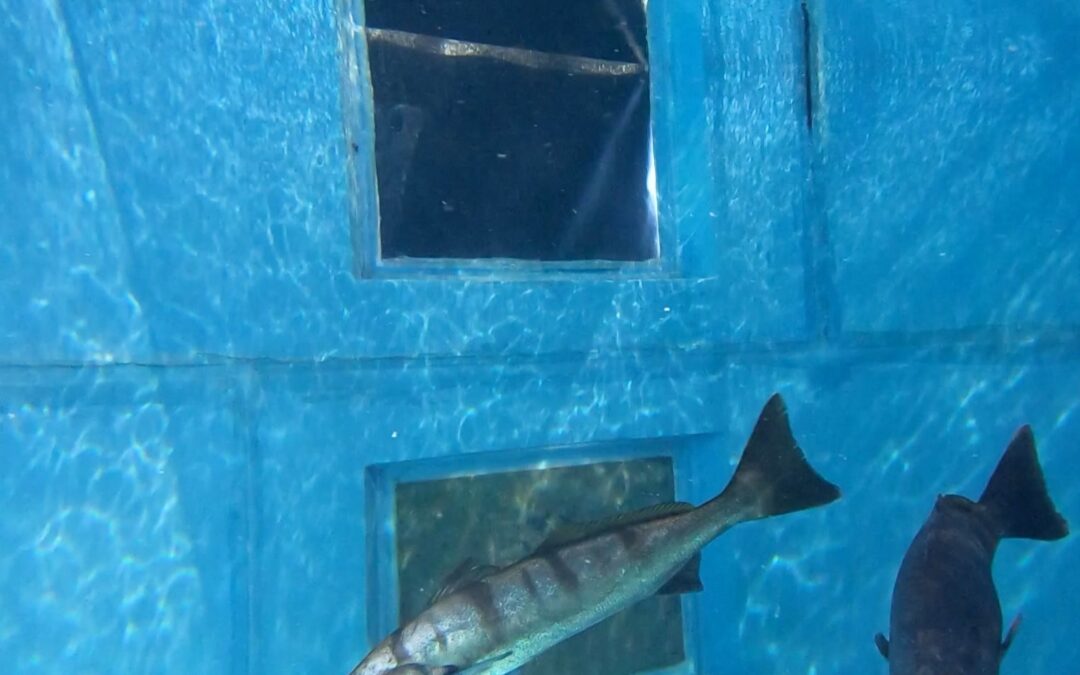 SAN DIEGO (April 25, 2022) – A genetic-marker methodology for identifying the success of fish-stocking efforts was recently applied to white seabass and has convincingly shown that previous estimates of Southern California’s Ocean Resources Enhancement and Hatchery Program (OREHP) contribution to the once-depleted white seabass population have been greatly underestimated.

This project, initiated four years ago, was conducted as a collaboration between HSWRI and the South Carolina Department of Natural Resources (SCDNR), along with a graduate student from the College of Charleston who recently presented these preliminary results at an international conference in San Diego. HSWRI manages the OREHP at its Leon Raymond Hubbard Jr. Marine Fish Hatchery in Carlsbad. SCDNR has perfected the genetic-marker methodology over the past 20 years and was able to achieve a 99.99 percent confidence level to distinguish between hatchery-reared and wild fish in this study.

“Since beginning genetic-marking work in 2002, we have successfully processed samples for 12 species in five states, and have now added another species and another state,” said Tanya Darden, Ph.D., Director of SCDNR’s Marine Resources Research Institute. “One of the goals of this project was to compare results from our methodology with traditional results from scanning for coded wire tags implanted in the hatchery fish prior to release.

“We found the genetic-based assessment technique shows that the contribution of hatchery fish to the wild fishery is much greater than results from scanning for coded wire tags suggest,” she added. Genetic material from OREHP’s brood fish dating back to the opening of HSWRI’s hatchery in 1995 was obtained from tissue samples and preserved otoliths. Those were genotyped and compared with genetic markers from preserved otoliths of hundreds of white seabass collected from the wild as sub-legal-size or legal-size fish. All were also scanned for coded wire tags.

A total of 713 sub-legal white seabass provided by HSWRI came from three areas off Southern California. Another sample of 50 legal-size fish caught commercially in Mexico were provided by Chesapeake Fish Company in San Diego. Of the sub-legal fish, 597 were successfully genotyped and 46.2 percent were identified as hatchery fish. Of the adults, 43 were successfully genotyped and 30.2 percent originated from the hatchery.

As a comparison, only 7.4 percent of the sub-adults had coded wire tags and none of the adult fish did.

“We don’t know whether the wire tags were shed, migrated to other places in the fishes’ bodies or malfunctioned,” explained Mark Drawbridge, M.S., HSWRI Senior Scientist. “That clearly is one area that calls for further study.

“But these results are extremely promising for the OREHP program and for restoring the white seabass fishery,” he added.  “Another next step is to test a sample of legal-sized fish from Californian waters.  This will give us a better indication of hatchery contribution to the fishery over the last 25 years.”

OREHP is funded by the California Department of Fish and Wildlife largely through sales of the Ocean Enhancement Stamp required on fishing licenses for anglers between Point Arguello and the Mexican border. The program was begun in 1983 and has since released more than two and one-half million juvenile white seabass along the Southern California coast.

In 2017, a report by California Sea Grant commissioned by the DFW suggested that OREHP’s fish accounted for a little less than 1 percent of the white seabass fishery, a statistic that surprised many proponents of the program.

“There are several aspects of this preliminary work that require additional research,” Drawbridge said. “But we hope these promising results will attract the interest and funding to continue this work for the good of the white seabass fishery and the people who enjoy fishing for them.”

The study – “Population Genetic and Stock Enhancement Tools for Conservation of Overfished White Seabass” – is being finalized before being published in a peer-reviewed scientific journal. OREHP’s Science Advisory Committee will also be reviewing the results and making recommendations on directions for future research.

HSWRI is a not-for-profit, 501(c)(3) research organization founded in 1963 “to return to the sea some measure of the benefits derived from it.” With a long-standing legacy of pioneering marine science that increases understanding of animals and their ecosystems, it enjoys international renown for its work.  Its areas of inquiry are ecology, physiology, bioacoustics and aquaculture.  Through science, the application of advanced technologies and the expansion of knowledge, the Institute provides effective solutions to conflicts that arise between human activity and the natural world.  Hubbs-SeaWorld scientists apply sophisticated technologies to seek the solutions that protect and conserve marine animals while benefiting humans and their reliance on marine resources.  Based in San Diego with facilities in Orlando, FL and Carlsbad, CA, HSWRI’s unique contributions are due in part to access to SeaWorld’s extensive marine zoological collection, a close association with local universities and highly respected scientific staff.  For more information, visit www.hswri.org.