Due to severe declines in abundance throughout southern California, the green abalone (Haliotis fulgens Philippi 1845) became protected under a state-sponsored fishery moratorium in 1997 and was declared a NOAA NMFS Species of Concern in 2004. Recently, H. fulgens was chosen for possible stock restoration via translocation of wild adults to depleted habitat and supplementation through releasing cultured individuals. Before a management plan could be developed, however, an understanding of the species’ natural population genetic structure was needed. We used a genomic technique called restriction site associated DNA sequencing (RADSeq) to address the issue. RADSeq enabled discovery of 1,209 single nucleotide polymorphisms theoretically spread genome-wide in H. fulgens. Analyses suggested the species may be panmictic throughout our sampled range, with an effective population size (Ne) of 1,100–3,600. Hence, limitations to management, such as requiring local broodstock and restricting translocation potential, might be unnecessary. Sites with larger populations may be suitable sources for restoration of depleted sites (e.g. the Palos Verdes Peninsula), although the extent of local adaptation remains unknown. Despite this potential for restoration, results gathered on a sample of cultured H. fulgens illustrated how quickly genetic diversity can be lost through captive breeding. To help mitigate a drop in Ne due to hatchery supplementation, we recommend collection and replacement of ≥100 wild abalone per generation for broodstock and close management of the proportion of cultured individuals in the wild. Successful implementation will depend on operational capacity and the resilience of the source populations to broodstock collection. 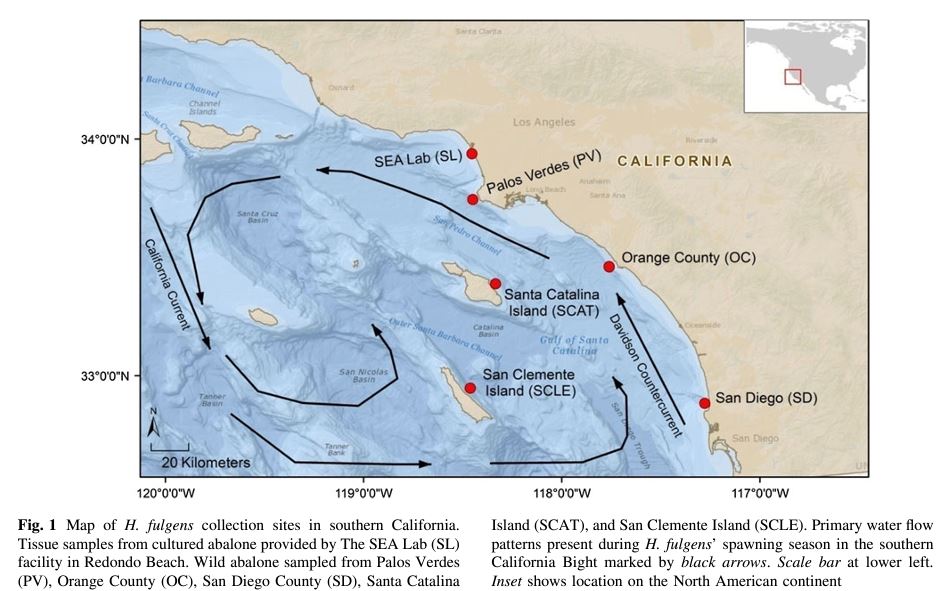