After four months of critical veterinary treatment by the SeaWorld® San Diego Rescue Team, a well-mended Guadalupe fur seal is back in the ocean today with a second chance at life.

On Thursday March 12th, the animal was outfitted with a satellite transmitter by Hubbs-SeaWorld Research Institute senior research scientist Dr. Brent Stewart who hopes to gain crucial data about where the threatened species travels, spends time foraging for food, and ultimately thrives in the ocean. The transmitter will likely dislodge from the seal when she molts within the next four months or so. At birth Guadalupe fur seals weigh about 13 pounds and male fur seal can grow to 6 feet and weigh up to 350 pounds at adulthood. Females reach 4½ feet and weigh up to 100 pounds.

SeaWorld animal rescuers came to the aid of the Guadalupe fur seal that was found thin, lethargic and dehydrated and in need of urgent medical care, on Nov. 5, 2014, off Camp Pendleton. Upon arrival at SeaWorld’s Animal Rescue Center, the pup weighed 9 pounds. SeaWorld animal caretakers and medical teams treated the seal with fluids, antibiotics and supportive care, which included a nutrient-rich diet of capelin, sardines and herring. The seal, whose weight more than doubled while in SeaWorld’s care, was returned to the ocean at a healthy 18½ pounds, able to forage for food on its own. 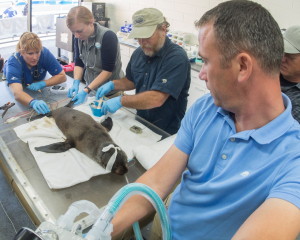 On Thursday, March 12, the SeaWorld Rescue Team set a record with the 475 marine mammal to be rescued by the park in a single year. The park’s goal is to return rescued, nursed to health animals to the wild for a second lease on life. Nearly 70 percent of the animals rescued by the park are returned to the wild. A dozen California sea lions that have been in the park’s care from five to seven months were returned to the ocean with the fur seal today. 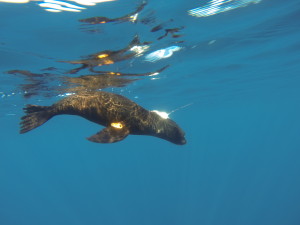 Since its recovery from the brink of extinction in the early 1900s, the population, thanks to conservation efforts, has swelled to approximately 10,000. The Guadalupe fur seal is the least studied fur seal species due to its limited geographic range — south from the Guadalupe Island, Mexico to Southern California at San Miguel Island.