Just how many dolphins live in the Indian River Lagoon? It would take a small village to find out. 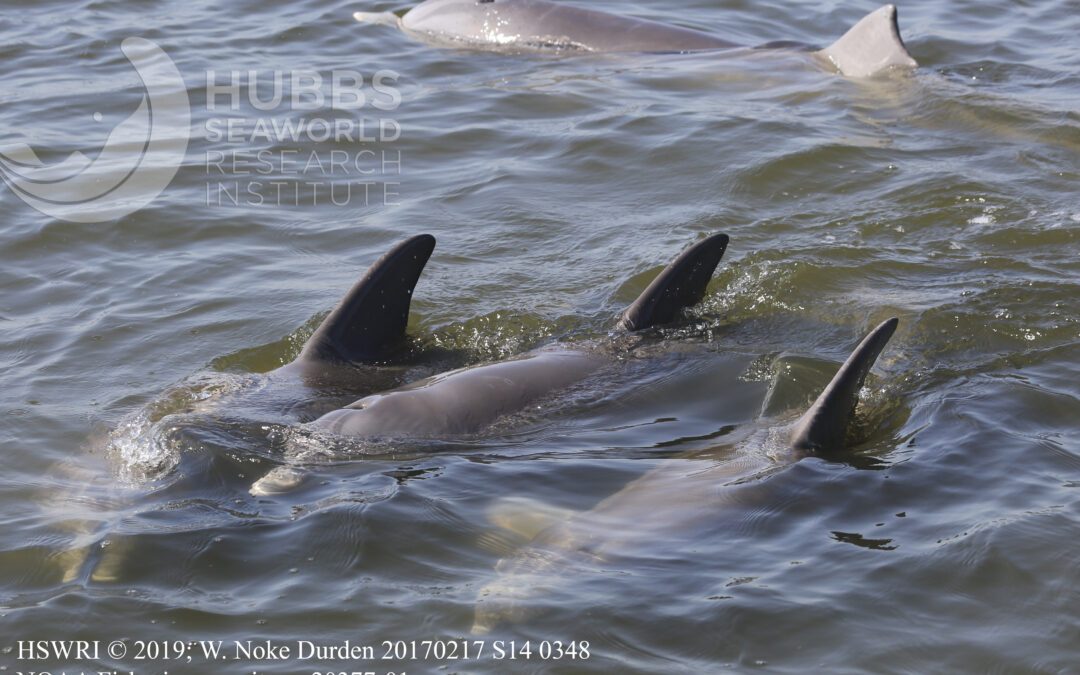 On April 28, 2021 the study titled, “Abundance and demography of common bottlenose dolphins (Tursiops truncatus truncatus) in the Indian River Lagoon, Florida: A robust design capture-recapture analysis”” was published in PLOS ONE; a peer-reviewed open access scientific journal published by the Public Library of Science since 2006. This publication entails a rigorous peer-reviewed editorial and assessment process and allows authors to make their research available for all.

This team was the first to use mark-recapture photo-identification boat-based surveys following a Robust Design to estimate abundance, survival, and to assess rates of dolphin movement in and out of the lagoon. The expansive nature of the lagoon which spans ~220 km along the east coast of Florida, includes three sub-basins and encompasses over 900 km2 area, makes vessel-based estimation very challenging. In fact, prior estimates of dolphin abundance have relied on aerial survey methods, surveying the population with a small plane to estimate dolphin abundance. But there was another option. Bottlenose dolphins, like many other dolphins and small whales can be identified based on unique markings on their dorsal fin, a method commonly referred to as photo-identification. Mark-recapture methods use patterns of resightings of these uniquely marked animals to determine abundance, survival and even to evaluate movements of animals in and out of the estuary. However in order to use these methods, we had to be able to thoroughly cover the entire Indian River Lagoon multiple times over short time period, and repeat this process throughout the year. This would be incredibly challenging, requiring 11-13 vessels staffed with experienced personnel, that would need to work together to follow a 470 mile zig zag path created to cover nearly all aspects of the lagoon. The team would need to photograph every dolphin sighted along the journey, obtaining high quality images of each animal that would be needed for analyses. Challenging, for sure, but nothing this team couldn’t handle! A total of 135 surveys were conducted and over 150,000 images analyzed. The verdict, an average of 1,032 dolphins residing in the lagoon! While this means about 8% of the population died during the 2013 UME (77 mortalities), the estimate is remarkable similar to our prior estimates suggesting the population has at least remained relatively stable over the last decade. During the study year we found survival estimates for the lagoon dolphins were comparable to those seen in other estuarine populations and that the majority of Indian River Lagoon dolphins were resident to the estuary. Abundance numbers will enable the assessment of mortality numbers in context of the population size, allow us to monitor trends over time and are needed for mangers to assess mortality from anthropogenic sources. This study paves the way to replicate the study in future years, providing value guidance to future study design.

Funding for this project was provided from North Carolina SeaGrant, SeaWorld & Busch Gardens Conservation Fund and from the proceeds of the Discover Florida’s Oceans specialty license plate. The authors are grateful for support from Volusia County Environmental Management, St. Johns River Water Management District, the Dolphin Ecology Project and countless colleagues, interns and volunteers that made this project a success.

About Hubbs-SeaWorld Research Institute: Hubbs-SeaWorld Research Institute was founded in 1963 to conduct research in the tradition of world-renowned scientists Dr. Carl L. and Laura C. Hubbs. Since the beginning, the Institute’s scientists have been dedicated to addressing the complex conservation challenges facing our oceans and coasts. Institute scientists seek effective solutions that protect and conserve marine animals and habitats while balancing the needs of humans and their reliance on marine resources. In 2013, HSWRI celebrated 50 years of its mission “to return to the sea some measure of the benefits derived from it.” Additional information about the Institute can be found at www.hswri.org.