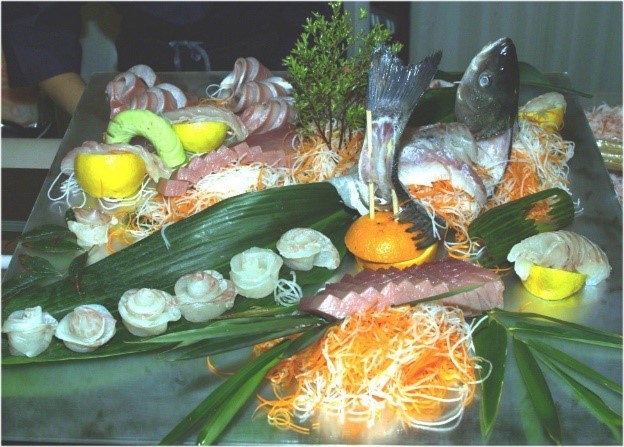 Aquaculture products can be used to fill a wide range of marketing niches but they are most commonly associated with the production of food, similar to agriculture on land.  Most of the species of fish cultured commercially in the United States were originally developed for stocking purposes – e.g. trout, salmon, catfish, and striped bass.  Once the main hurdles of spawning and larval rearing are overcome, the process of growing fish out for direct human consumption becomes a rather simple process from a biological and technological standpoint.  Thus, demonstrating the feasibility of a direct farm-to-table approach was a logical transition for us to pursue from a research standpoint.  Having a species that can be successfully stocked into the ocean and also raised directly for food (like salmon) is a winning combination.

In the late 1990’s we received a NOAA Saltonstall-Kennedy (SK) Program grant to conduct one of the most ambitious research projects we have ever done.  At that time, the culture potential of white seabass (Atractoscion nobilis) had been under investigation for more than fifteen years, as part of an experimental stock enhancement program in southern California.  The purpose of the SK project was to determine if cage culture technologies could be adapted to grow white seabass to a marketable size in an offshore, semi-exposed location.  The project was also designed to evaluate the marketability of subadult, farm-raised white seabass, and to tag and release a portion of the fish into the ocean.

The results of this study demonstrate that white seabass are biologically well suited for cage culture.  A survival rate of greater than 95% was attained during the sixteen month study period.  Fish health was generally good, with only a mild outbreak of gill flukes requiring treatment.  Fish grew from approximately 40 to 720g, which was slower than desired but to be expected due to the cold water (“La Niña”) oceanographic conditions.  Fish were harvested at a final density of 12.3kg/cubic meter. 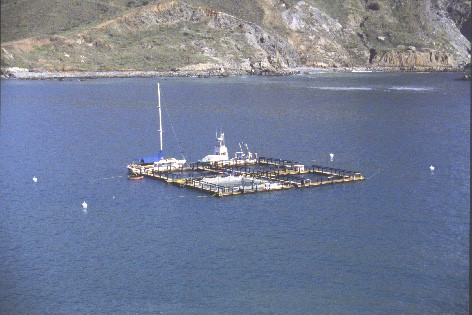 Farm-raised white seabass received good reviews from industry professionals when rated for appearance, taste, texture, freshness, and ease of processing.  When asked how much they would be willing to pay per kg of whole fish and how many kg per week they would purchase, local wholesaler responses ranged from $4.40-$6.60 per kg and 23-2,270 kg per week, respectively.

At the end of the study we concluded that additional research was required to test the economic model we developed.  Also, that the next phase of research would need to involve site identification and permitting for an exposed, offshore location where economies of scale could be achieved. 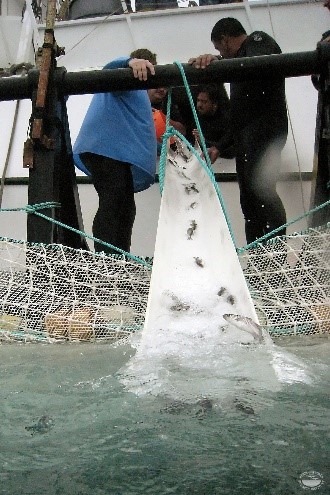 In the mid 2000’s we received a NOAA National Marine Aquaculture Program grant to conduct an even larger scale demonstration project than the one we did at Santa Catalina Island.  Like the Catalina project, we had a two year funding timeline to get the permissions to set the project up, to order and install the equipment, and to acquire and grow the fish.  We tested a traditional surface cage and a submersible cage, as well as several species.  Adequate numbers of yellowtail (YT) were not available for the full scale trial comparing cage designs, so striped bass (SB) were acquired and used successfully for this purpose.  A smaller number of YT were successfully grown in cages on site.  This represents the first time that cultured YT and SB were put into cages in the Eastern Pacific Ocean, an important step in the development of offshore aquaculture on the U. S. and Mexico’s west coast.

Fish health among SB and YT was very good and no treatments for disease were required.  Growth in both populations was hampered by cool water temperatures caused by upwelling.  Both cages performed well at the study site, including during storms that generated wave swells of 5 m or more.  The SeaStation (SS) sank early in the study period due to unique combination of circumstances that were quickly corrected.  Remarkably, the cage was not compromised and most of the fish survived even after a month without food.  The SB in the SS did not respond well to our handling methods during periodic weight sampling, which accounted for most of the disparity in mortality between that group and the cohort in the surface cage.  Further research is required to understand if the fish in the SS were chronically stressed by submergence or if some other explanation exists.  The SS did prove to be more predator-proof than the surface cage, including against poaching.  No escapement events were reported for either system.

Feed efficiencies varied widely during the study period, presumably as a function of staff experience and lack of consistent farm help.  At the water temperatures at that site, feeding at ~0.8% body weight per day yielded good FCRs of approximately 1.3.  FCRs below 1.0 were recorded in both cages, indicating that it is possible to achieve high efficiency in both cage types.  The surface cage was much easier to manage in terms of feeding and harvesting because these tasks could be performed from the surface while observing the fish.  The SS required less cleaning, presumably because there was less light and associated biofouling, as well as net surface area.

From an economic standpoint, the SS cost almost twice as much to purchase and install than the surface cage.  Using our methods, the SS had lower labor requirements for cleaning but higher for harvesting.  Without improvement in efficiency, this would become significant on a commercial farm when fish are harvested twice per week.  The high level of post-handling mortality in the SS would also result in high economic losses if left unresolved.  Test marketing of product was limited from this study because the SB were too small at the conclusion of the project.  Product that was tested before and during this study indicated that prices of at least $6.60/kg should be achievable for SB and small YT.

The study would have benefited greatly from an additional year of funding to refine methods and allow the fish to reach a market size.  Remarkably, since this project ended, farmers in Mexico have started successfully growing striped bass and yellowtail commercially – thanks in large part to us for showing the way! 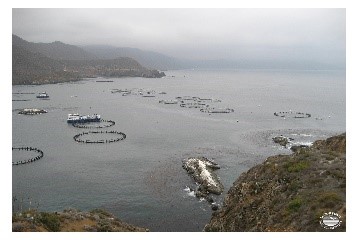 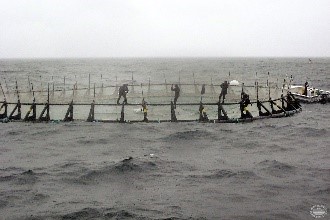