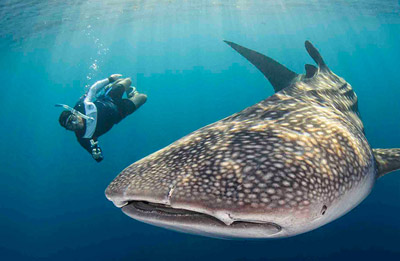 Whale Sharks in the Gulf of California

For almost 30 years we worked with collaborators in the Indian, Pacific, and Atlantic oceans at locations including the Philippines, the Maldives, the Galapagos, the Gulf of California, the Gulf of Mexico, Indonesia and West Papua, Kenya and Western Australia. Over the decades we tackled some of the basic questions about whale shark population biology, biogeography, ecology, and behavior. This world-wide sampling allowed us to test the DNA of whale sharks, and we found the only inherited gene clusters (haplotype) distinction was between the Atlantic and Indo-Pacific populations. This global pattern of shared haplotypes in whale sharks argues for broad international approaches to  conserve Earth’s largest fish.

Publication:
Eckert, S.E. and B.S. Stewart. Telementry and satellite tracking of whale sharks. Rhincodon typus, in the Sea of Cortez, Mexico and the North Pacific Ocean. Environmental Biology of Fishes. 60(1/3):299-308. 2001.