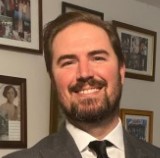 Nick grew up along the Indian River Lagoon which inspired him to become an environmental scientist and advocate of stewardship.

During his time with the City of Satellite Beach as an Environmental Programs Coordinator, he has learned to collaborate with each department within the City, its boards, the City Council, and partners beyond its borders to further the implementation of the City’s Sustainability Action Plan and its related projects, programs, and policies. He has completed numerous projects such as installing a 65 KwDC solar array on City Hall and a 25 KwDC solar array at one of the City’s parks. Since 2018 he has been writing grants to complete targets of the City’s Sustainability Action Plan. In 2018, he wrote a grant to the NEP for the “Desoto Stormwater Enhancement Program”, designed to use native plants to reduce the nutrient content of stormwater before it enters the IRL. In 2020 he led the creation of the Tree Resiliency for Environmental Engagement and Stewardship (TREES) program, for residents to plant trees at home. In 2021 he applied for and was approved to create the second phase of a 1-acre habitat mosaic pilot project in the Indian River Lagoon to test new techniques of growing oysters, clams and seagrasses. On this project there we have 10 project partners contributing $122,500 and the Tourism Development Council providing $133,262 to the project. The first phase of this project was grant funded by the NEP.

For the past five years he has been engaging with 11,000 residents of the City by hosting a series of workshops, attending and creating events, writing articles for the City newsletter the Beachcaster, managing the City Facebook page, creating videos on the cities projects and programs while visiting local schools to present educational information. Since he started working for the City, he has obtained a certificate in Geographical Information Systems, became a Stormwater Management Inspector and is currently studying to become certified as a Climate Change Professional with the Association of Climate Change Officers.