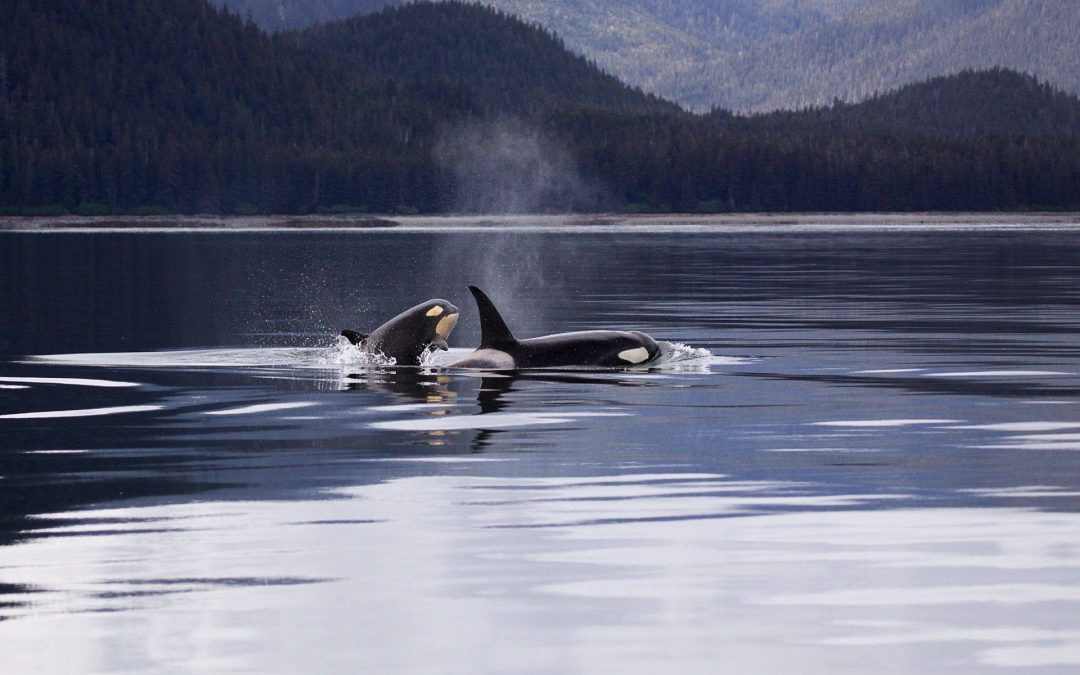 The Southern Resident Killer Whale (SRKW) population is viewed mostly during the spring, summer, and fall in the inland waterways of Washington State and the transboundary waters between the United States and Canada. Less is known about their winter movements, but they have been spotted as far south as central California during the winter months. In 2005, the Southern Resident killer whales were designated as endangered under the federal Endangered Species Act. After reaching a peak size in the mid 1990’s the population has declined and continues to today. Popular thought currently is… if we do not take action – immediately – this population will go extinct.

What follows is a summary of his work.

Cetaceans (Whales, dolphins and porpoises) are completely unique mammals as they are massive top predators who often live in very close proximity to major metropolitan areas. This subjects them to a myriad of human-caused stressors such as decreased food availability, exposure to contaminants, and noise pollution.

Yet these animals, given their longevity and position at the top of the food web, provide the opportunity for key insights into the health of our nearshore environments if they can be effectively studied. As toothed whales and dolphins capture and consume prey underwater, understanding key drivers of health such as diet is extremely difficult.

A molecular technique known as stable isotope analysis can take advantage of the natural variation in the weights of carbon and nitrogen atoms in food sources to offer insights into the diet of wild cetaceans. While animals generally “are what they eat” in terms of their stable isotope values, a predator will have a consistently higher value than that of its prey.

The offset between predator and prey is known as the trophic enrichment factor (TEF) and while these values are well-studied for small land mammals, they are poorly understood for extremely large marine predators. This is a critical gap in knowledge as many marine mammal populations, such as the Southern Resident Killer Whale population who are residents to the Salish Sea in the Pacific Northwest, are critically endangered as a result of their interactions with humans. Prey shortages are likely contributing to the decline of this iconic population, however, without a working stable isotope diet model, long-term diet monitoring is difficult.

Using the killer whales housed at SeaWorld San Diego, Dr. Rossman and team conducted a diet analysis to accurately define the TEF values for killer whales as a means to provide greater insight into the SRKW population’s diet. They analyzed the isotopic composition level of individual killer whale diets over six months as well as blood plasma collected from the killer whales as part of routine veterinary care.

The results indicate that for killer whales, the TEF is higher for carbon and lower for nitrogen than typical values for most mammal species. These new TEF values can be applied to previously published stable isotope data for the SRKW (Herman et al. 2005, Krahn et al. 2007, 2009) and various salmon species. The model indicates SRKW heavily rely on Chinook salmon, and Coho and other salmonid species to a far lesser degree.

These results are extremely consistent with diet estimates from more intensive genetic methods (Hanson et al. 2010). This work documents that stable isotope diet models are a cost-effect and accurate means to study the SRKW population. This method could now be applied to better understand questions like dietary differences between different SRKW pods, pathways of contaminant exposure, and seasonal diet.