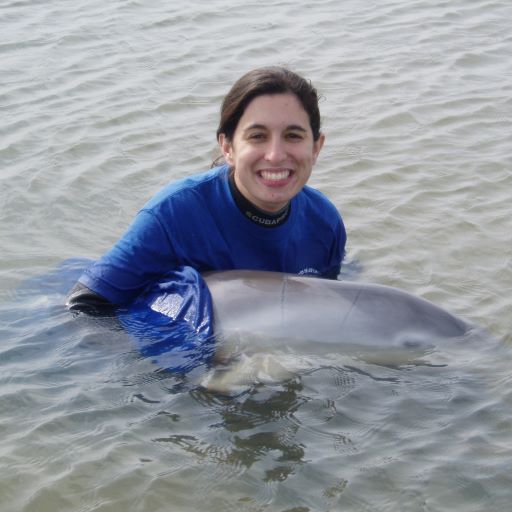 The Dolphin Tale movie brought to the big screen the true story of Winter, a severely injured dolphin who stranded off the Florida coast and received breakthrough medical care that allows her to swim with a prosthetic tail.

While her story of rehabilitation is remarkable and deserving of Hollywood’s attention, the movie barely touches on Winter’s amazing rescue by Hubbs-SeaWorld Research Institute’s (HSWRI) Marine Mammal Stranding Team and other animal care experts who struggled for almost an entire day to save her life.

On the morning of December 10, 2005 Teresa Jablonski, research assistant for HSWRI, received a call from Florida Fish and Wildlife Commission (FFWC) asking her to respond to a call from a fisherman who had found a baby dolphin tangled in a crab pot line in Mosquito Lagoon in Canaveral National Seashore, Florida.

When Teresa arrived on the scene, the dolphin was bleeding and gasping for air. Her tail already destroyed by her struggles and lack of circulation. Jablonski was sure the dolphin was dying.  She called her colleague and friend Claire Surrey at the FFWC, who came right out to help. With the help of Jim Savage, the fisherman that found her, and another boat of good Samaritans, they were able to guide the dolphin to a sandbar and took turns holding her across their laps in the frigid water. Teresa said, “When we first got close she was squealing in pain and freaking out.  But once I had her in the shallow water, she lay with her head in my lap. I kept splashing her and tried to keep her shaded to prevent sunburn.” Jablonski and Surrey continued to monitor her vital signs, and did their best to keep the young dolphin calm.

Finally at dusk, a SeaWorld rescue van arrived. Jablonski, Surrey and a team of other animal care specialists carried the baby dolphin ashore in a stretcher. It was a five-hour trip to the Clearwater Marine Aquarium, her new home, where she would be named Winter.

The dolphin squealed loudly as they took her away on a stretcher. “You could tell she still had a lot of energy and fight left in her,” Teresa said. “It was a good sign, actually.”

Winter did survive, but her tail did not.  Those hours she spent trapped by the crap pot lines cut off circulation and her tail rotted off taking three vertebrae with it.  We all know by now the story has a happy ending. Winter was fitted with a prosthetic tail to aid in her recovery and she is now the star in the Hollywood movie, Dolphin Tale.

While this is an incredible story, this is just one example of the lengths to which our Marine Mammal Stranding Team and other marine mammal specialists will go to in order to care for these animals on a daily basis.

The HSWRI Marine Mammal Stranding Team is the federally permitted “first responder” to all reported whale and dolphin strandings along Brevard beaches. Brevard County has more cetacean (whale and dolphin) strandings each year than any other coastal Florida county.

Since beachgoers and local government employees, especially lifeguards and beach patrols, are generally the first to report a live stranded marine mammal, HSWRI has developed a training DVD for use by Brevard county lifeguards as well as lifeguards throughout the southeastern United States.  Through the development of this DVD and other education and outreach efforts, the HSWRI team helps train individuals that are most likely to encounter live stranded marine mammals and also provides basic supplies needed to care for live stranded animals until reinforcements arrive.